On our PNT hike, most of our travel days followed this general schedule: wake up before the sun, pack up, slap mosquitoes, hike as far as possible before lunch.  Eat lunch.  Slap mosquitoes. Keep hiking until dinner time and we find somewhere flat to sleep. Slap mosquitoes. Look at maps, write in journal, go to sleep. Lest I bore you with the mundane, I’ve decided to try to pick out some highlights from the beginning of our adventure – some excerpts from my journal that made me chuckle.  Some days not mentioned here will show up in their blogs, as they warrant a novella by themselves.

Admittedly, when you don’t know the others involved, they are undoubtedly going to be less funny to you than they were me, so I’ll apologize in advance.  Most are lacking the depth of what was happening; there was so much more of the story. However, I hope that you can get an idea of some of the joy (and less-than joyful times) that we shared.

Also, on some of the long days, all I could muster at the end was a list of happenings.  Please excuse the expletives and lack of complete sentences.  Days that ended up with energy for actual grammar and paragraphs were in short supply.   Also, going to sleep by 8 pm really cuts into your evening writing time.

July 4th:  First day of hiking!  Judy and Jonathan dropped us at the trail head at Chief Mountain Customs and we were on our way.  Notable camp things: friendly deer, mosquitoes (a healthy supply), met other PNT hikers, beautiful, so nice, despite bugs.  Tweety birds.

July 5th: Lovely scenery, first water crossing – so, so cold.  Made it down the snow hazard, found some think brambles of thimbleberries.  Somehow beat Connor to camp, despite him being ahead of us.  Swimming in the lake! The bugs aren’t as bad out in the open.  Katherine and Jared are at our campsite too. Learned that Connor is carrying monkey kibble to supplement his diet.  I guess that’s one way to save weight.

July 6th: Day three on the trail. Started out with laughter.  Connor had his stuff sack on his head as a bug net.  When he went to take it off, it was pretty snug, squashing his nose up as he peeled it off.

Jared adds, “Now we know the next highway robber.”

As we headed out for the day, we found so. Many. Mosquitoes.  Hordes!  I donned my bug net, and stashed the poles.  I walked continually swatting my shoulders (the mosquitoes were biting through multiple layers).  Each swat took out approximately 6-10 at a time.  Not sure if the dull burn is from the impact or the bites.  Made record pace as a result.

As we are in a wind tunnel at this campsite, it was a challenge to get the tents laid out and staked down before they blew away.  Not only this, but the mosquitoes were still vicious (apparently, they gave no sh**s about the wind).  With a lot of swearing and some ingenuity, we got them set up.  Each time we hear a big gust of wind rocketing down the valley we cringe and brace for it.  Fingers crossed we make it through the night!

July 7th: Deer stole Jared’s shirt.  Jen came running back from the outhouse to let us know, and everyone ran up to go see.  The shirt was retrieved and completely covered in deer spit.  Pretty hilarious.

That F-ing deer stole my bra.  Should have known better after it stole Jared’s shirt.  Chased it all over the woods and still it just looked at me, chewing away.  Will look for bra in the AM. MFer.  Note, the xero shoe sandals work well for sprinting in woods.

A little later: we hear, “Hey, He’s back.  He has your bra!” from Nick’s tent.  I threw on some pants and run out there, and I’ll be darned, there that MoFo is.  Namming away like it’s bubble gum.  “Drop it.  Drop it!” Nick yells.  The deer continues, until it spots his poles, when it promptly drops my bra and goes for them instead.  I shooed him away, handing the poles to Nick while gingerly holding my slimy bra, doubling over in laughter.  I rinsed out my bra in the lake and used a stick to hang it from a high branch. Hopefully it is high enough up!  Some teeth-marks, but otherwise looks to still be functional.

(side note, these articles of clothing were worn by both myself and Jared over the entire rest of the adventure.  A smattering of holes just added to the fashion.)

July 9th: Really hot, long road walk.  Ended at a lake – walked straight into the water.  Bath and laundry in one.

Nick wandered in a bit later stating, “Mama told me there’d be days like today!”

So many mosquitoes.  We retreat to tents early. 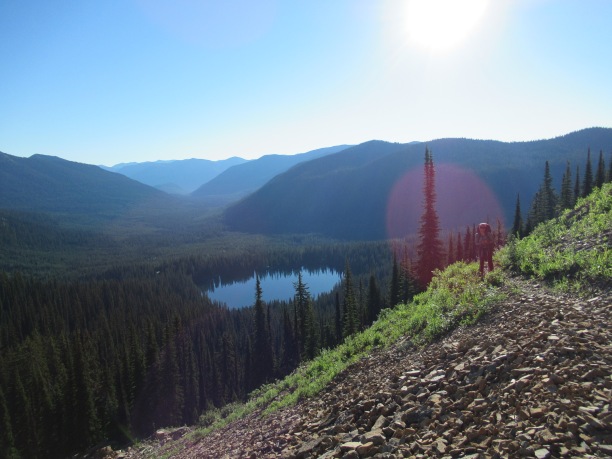 This might have been from July 11th…Jen looking cool with a lake.

July 11th: Longest day yet, because not much water.  Also, mileage off because of long road walk, have to get miles in to not run out of food before Eureka. ☹

July 12th:  Mosquitoes woke up pretty early.  Us too.  Started out with a good trail before…Burma Road.  Or, more specifically, the connector trail to get there.  It went straight down a gully, with too many downed trees to count.  It took us an hour and a half to go about one mile, having to stop every few yards to climb over, under, and around the trees.  We were thinking that maybe we had lost the trail completely, but then saw a lone PNT blaze on a tree – glad to be on track, sh**y that this is the trail.  About an hour in, Jen goes, “I don’t know how much more of this I can take!”

I answer, “Well, we don’t really have any other choice.”  I immediately regretted my sass and skipped on up ahead to give her some space.  Luckily we were nearly to the next intersection, and after consuming a granola bar, Jen forgave me for my cheekiness.

We came over the saddle and got cell service, learning that our friends had made it to Eureka, having had to miss a bit of the section as a result of injury.  This was incredibly cheering, even though we still had a lot of miles before we’d get there too.

We got to the trail head to find it at a dead-end road.  Guess we’re walking all the way to town.  So hot, dry, dusty.  No cars, no hope for a ride.  Finally a family with a goofy kindergartner came by. Thank goodness, we are saved!

They ask, “Where did you come from?  On what trail?”

Them, “Oh yeah, that trail isn’t maintained at all.  You should have taken the main trail between Polebridge and Eureka, it is beautiful and impeccably maintained.”

Our new friends gave our hungry, sore, exhausted selves a ride to the park in town were all our friends were camping.

July 13-14 Eureka.  Polebridge to Eureka beat us up, so our bodies and overall morale benefited from taking some time to recover!  We ran into many fun folks who were hiking the trail too, and generally had a lovely time eating all sorts of food and generally being lazy.

The town of Eureka put us up in their lovely city park by the river, complete with an unofficial park liaison, the Park Dude.  This man took it upon himself to assure that we knew that the sprinklers might come on at any moment and that we shouldn’t brush our teeth with the water over by where the RVs could dump.  He helped us remember this every time he saw us – one had to admire how serious he took his unofficial title!

He also warned us of the fire hazard of the area, leaving his cigarette smoldering in the dry grass as he wandered back to his picnic table office.  It was never a dull moment with the Park Dude around.

I hope that you’ve gotten a taste of some of the fun that we had.  Traversing Glacier National Park was a fairy wonderland of lakes, mountains, and good people.  The Polebridge-Eureka section was beautiful but humbling as the mileage, elevation, and heat increased and the water and trail maintenance decreased.  Look to future posts to learn what happened on the 10th, and beyond.

4 thoughts on “The Beginning: Glacier to Eureka”